Before the story .. I know many of you have stated in your comments that Sammy's passing was sudden and you didn't even know he was sick.  MamaBug never mentioned it because his symptoms started about the same time her's did -- and I just never thought of it.  We were taking less and less pictures of him so we could remember him as the gorgeous, handsome Sammy that he once was.  At one time he and Andy weighed the same, 14lbs, and on Friday he weighed 10lbs.  He was constantly drinking water and using the litter box, he got to where he couldn't squat any more so he would just do his business standing up ...... sometimes he would make it in the litter box and other times he would miss and he wasn't grooming himself any more.

Hard to believe he was ever that small!! 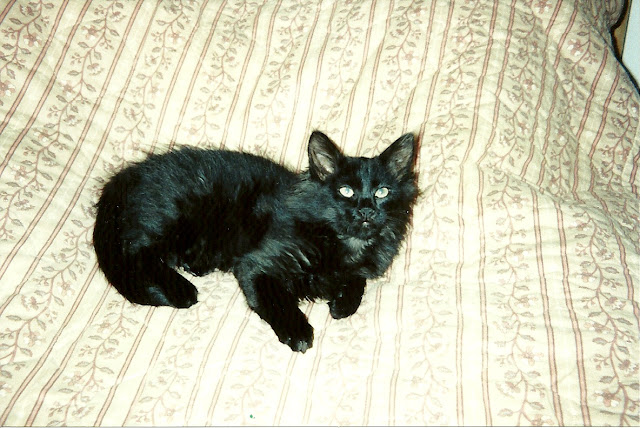 I have to share my Sammy story -- I'm afraid I'm not that good of a story teller but I have to share this.  I remember when MamaBug brought him home.  He was this little black ball of fur and so, so, so , so cute!  I totally wanted to kiss him all over and pet him .... but Sammy had other ideas!  Any time I would get anywhere near him he would hiss, growl, swat and bite me.  He wanted NOTHING to do with me and would treat the girls the same way.  However, every time I saw him I would always try to pet him. 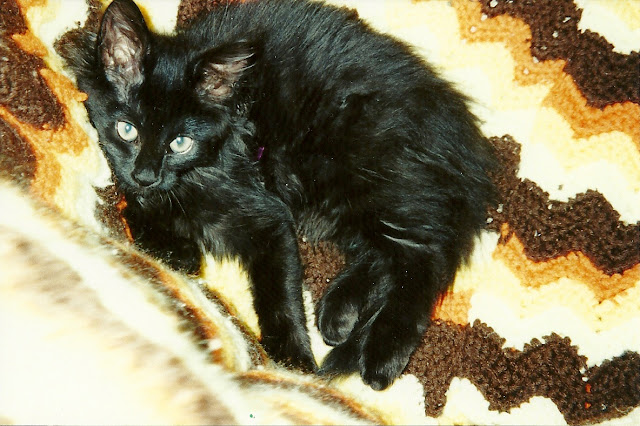 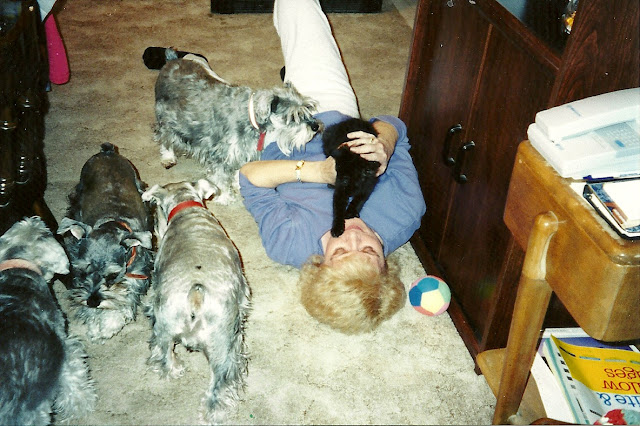 Then MamaBug came to live with me and the girls.  We were so happy and I was hoping I would grow on Sammy.  MamaBug went into have her second colon surgery and one night something jumped up on my bed  ... yup it was Sammy.  He slept at the foot of the bed for a couple nights and slowly worked his way up closer into petting range.  That's how our sweet friendship started and I'm so glad it did.  We had many special moments from cuddling on the couch, to him laying in front of the monitor resting his head on my hand.  We also had many cuddle sessions in the middle of the night! 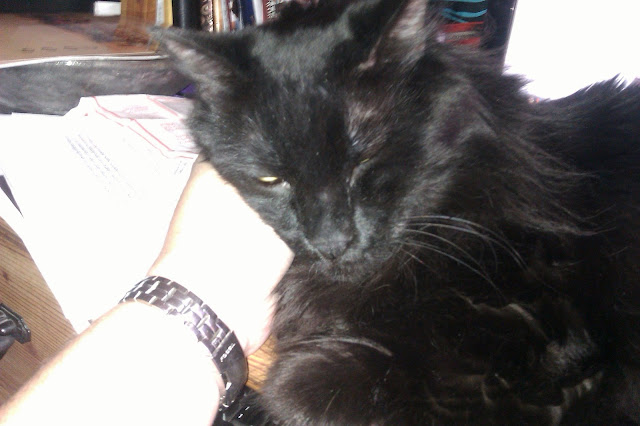 I will miss my dear furry little friend so much!!!  I hope you will enjoy these pictures we found of Sammy.  My scanner always put white spots on the pictures and sorry that some of the pictures aren't in focus.

Sammy arriving in his new home. 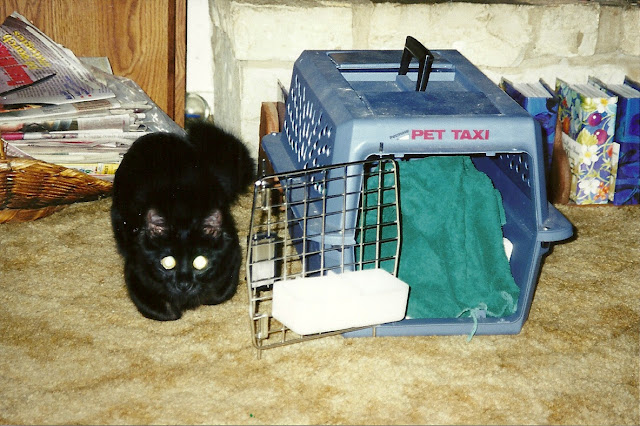 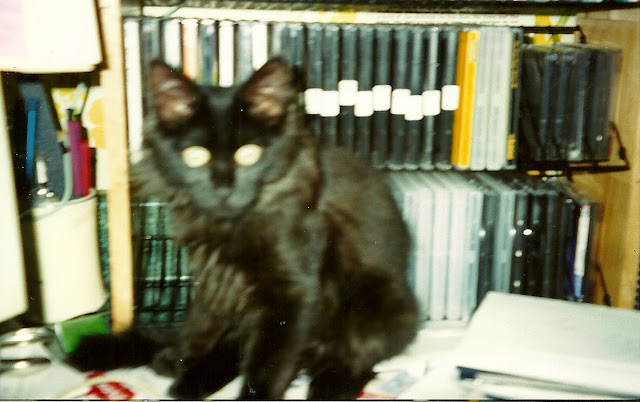 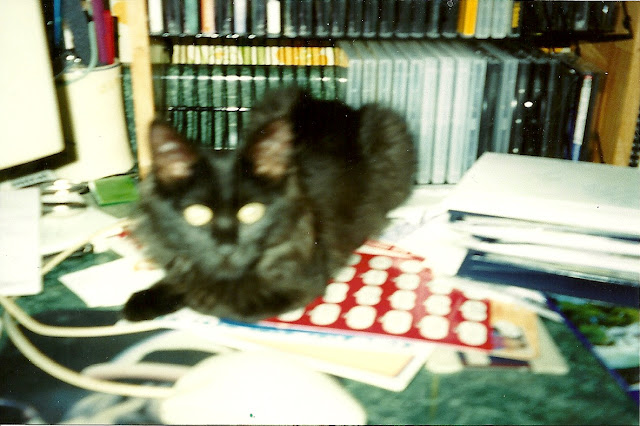 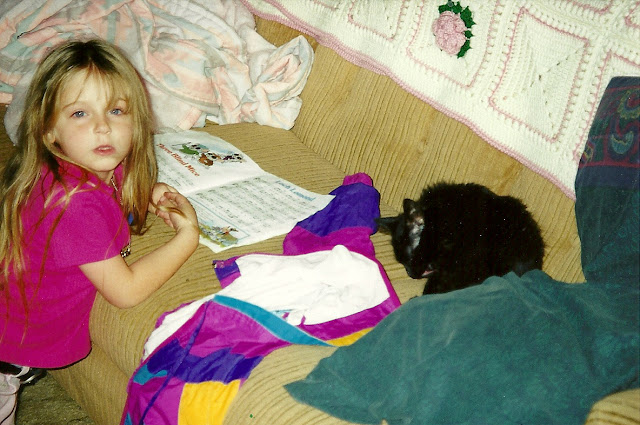 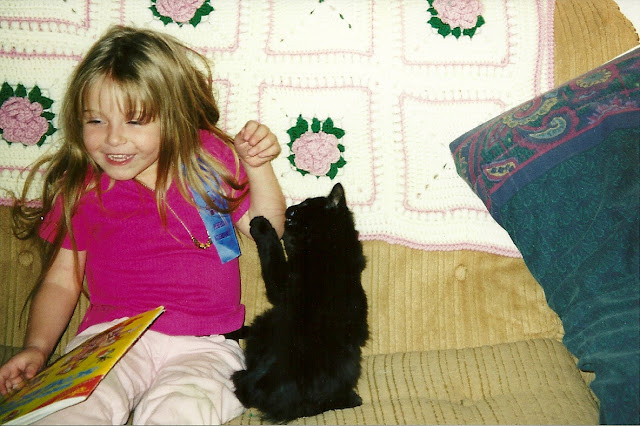 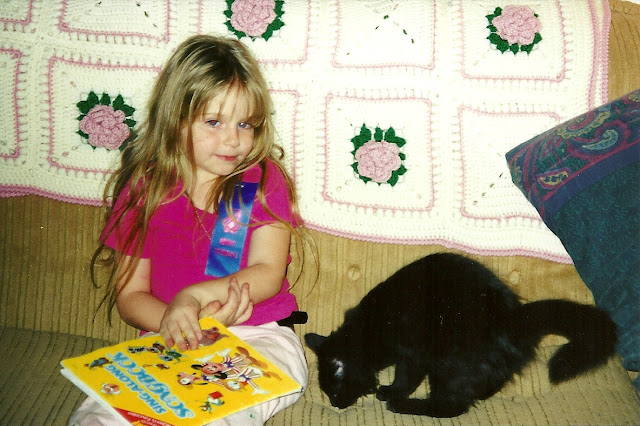 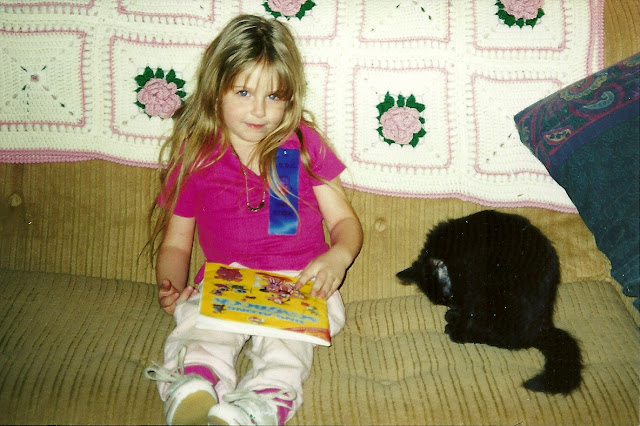 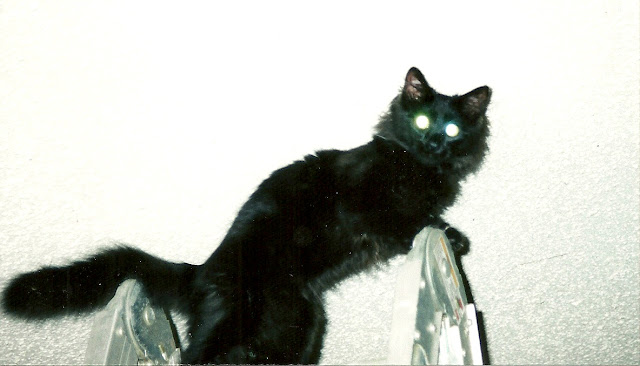 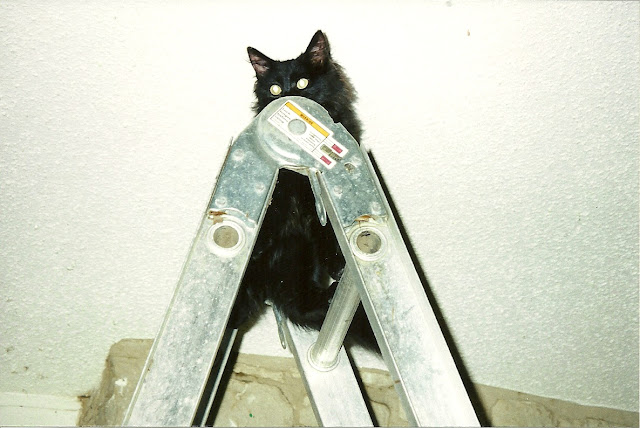 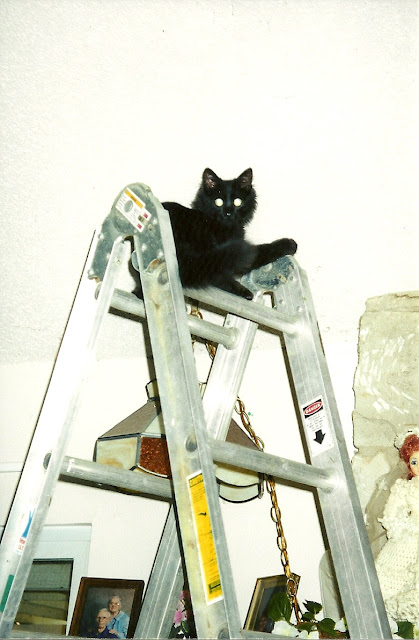 Hope you enjoyed the pictures of Sammy the early years!!!

We found a few other goodies that we will be posting in the next couple of days!!!

These are such sweet Sammy (and LaurynBug) photos - thanks so much for sharing them!

Thanks fur sharing these with us. He was such an adorable baby kitteh. Purrs of comfort to you and Judi-bug.

Awwww, its so lovely to hear the story about Sammy coming to live with you and see those beautiful kitty pictures. What wonderful memories you will have forever. Mummy loves to think that all our kitties are playing and having fun together. Hugs to you all xxxx

We loved seeing these old photos, thank you so much for sharing them. We're glad he had a good, long life with you and your family, but still are so sorry he passed. We hope the wonderful memories help heal your hearts.

Thanks for sharing Sammy's story with us. Beautiful post.

You told that story of Sammy just purrfect. Good job Traci. Thanks for this terrific tribute to Sammy. He was such a handsome boy. Big hugs to you Traci. You are being one strong gal. Take care.

That was a lovely tribute to Sammy, he was such a handsome gentleman cat. We loved his kitten pictures and we don't think we had ever seen any before.
Luv Hannah and Lucy xx xx

Such sweet, sweet pictures! Thank you so much for sharing them with us. (((hugs))) and purrs for Mom Judi. Stay strong, Traci!

Awww those pictures of Sammy are so precious. He was a cutie and one could not help but fall in love with him. By the way - you did a fine job of story telling.

We are so sorry....please let JudiBug know that we are sending purrs. No matter how long or the circumstances, it never gets easier. But he was loved....and that makes a lot of difference. Hugs to all of you...

This was a grrrreat tribute to Angel Sammy. THANKS fur sharing it with us.

Sammy was such a cute kitten. Thanks for sharing his story with us.

The Florida Furkids and Lexi

Such a sweet story. Lots of wonderful memories to hold onto.

Beautiful tribute to your special Sammy. You tell a great story, Tracie! He and Lauryn grew up together!

Those were adorable pictures and that was such a nice story about Sammy. We are so sorry he had to leave all of us but we know he is watching over us now.
Purrs
Abby

Those are wonderful pictures of precious Sammy. We loved the story too.

I was away and hadnt realised. I am so so sad at the news.. The pictuures are lovely and wil give you such lovely memories.. Hugs GJ xx

Traci the Sammy Story was sooooo sweet and well written. What a darling loving kitty he was.
He helped raise your beautiful daughters too. I just loved seeing all the pictures. I know how long it takes to scan and I do appreciate your sharing them.
Hugs Mads and Mom Love to MAMAJ
and you all,

We are heartsick but want to thank Traci for the adorable Sammy pics. He had a wonderful time on this earth, a good life and all of you have our thoughts and prayers xx

Weloved your story and the pictures...we are sending good vibes to you every day
Benny & Lily

We loved your Sammy Story. He was so handsome!! We will miss him very much. Purrs to all of you.

He was so precious! Hard to believe he was that small.

Thank you for sharing all these photos and your wonderful story. Yes, you do tell a good story! I know how difficult it is to lose a precious furry ... we must remember that they loved being with us just as we loved having them with us, too.

Thanks for sharing those early pics of Sammy--he was such a cutie!! That is a great story of how you and he became friends.

Such nice memories and photos of Sammy. Mom Paula understands about not taking pictures once he got sick. She didn't post too many pictures of Sweet Praline when she started losing so much weight and stopped grooming, except for her face.

Sammy will always be very special to us.

Thank you for sharing Sammy's story and the lovely pictures!! Our thoughts and prayers are with you during this sad time!!
Your TX furiends,

Thanks for sharing this touching post. I'm sending lights and love to sweet Sammy.He is now in a beautiful garden with adorable flowers and critters friends.
purrs
Luna - We love LUNA

Aw, thank you for sharing these wonderful memories with us. I've always found it theraputic to look at old photos and remember the good times.

Thanks yus for sharing! Boy Sammy (and Lauren Bug) was cute!
Thanks for sharing your happy memories!
Kisses
Nellie

Sammy was a lucky cat, had a beautiful family and now look for you directly from the Bridge.