Morning!!  I just wanted to give you all an update on me.

I had a BM yesterday and it was formed.  TraciBug was all excited, except I kind of went in the little carrier/bed thingie she made for me.  She promptly put me in the litter box.  I spent my whole day in the bathroom again.  I had a new visitor, someone they call LaurynBug, she is really nice.

I did end up using my litter box for my next "business"  this made TraciBug so happy!  I spent a lot of time with her in the bedroom last night while she worked.  She ended up putting me back in the bathroom saying something about the other "cats" wouldn't last the night not being able to come in the room.

This morning I am out and running around, well I'm not doing to much running, but I am exploring.  TraciBug keeps asking me if I'm ready to be on my own in this room.  She also said something about meeting a sisfur, Shelly.  I'm not sure what that is, or if I'm ready for it ..... but I know the bean will take care of me.

Time to go investigate .... Oh but before I do.  TraciBug says she hasn't forgotten about the update about the older kittens.  She hasn't had time to put it together, she's been working on a project for her boss from home.

After a stressful weekend we have GREAT news!  Polli had her first spa visit, weighs 4.8 lbs, and was tested for Feline Lukemia .... she came back negative and was immunized.  Polli has to go back in 3 weeks for a booster.  We have to keep Polli and the kitten separated until she has the booster.
The new kitten seems to be doing good.  She is eating, drinking and even had a little accident on the carpet.  TraciBean was working on a project for work (OT) and had the kitten with her in her room.  She thought the kitten needed some time outside of the bathroom to get a little excersize.  We think she is looking like she feels much better.

Oh and lastly, the Beans have named the kitten.  They have decided on Boston.  The Beans are New England Patriots fanatics and wanted a Patriots related name.  They decided that Boston (partially because KorinnaBean really liked the name and TraciBean had named the last 2 cats) would be her name ..... if/when she is able to fight of the virus she will be one strong kitty!
Happy Monday to all!!!
XOXOXOXO,
Shelly, Sierra, Polli & Boston

Hi!!  This is the first time I've done this ..... but will share everything that TraciBean has told me.  We have missed everyone ... TraciBean gets side tracked and doesn't get here like she wants .... truth is that she gets to carried away with FaceBook, Candy Crush Saga and now that it's football season, with football and of course work and the girls. 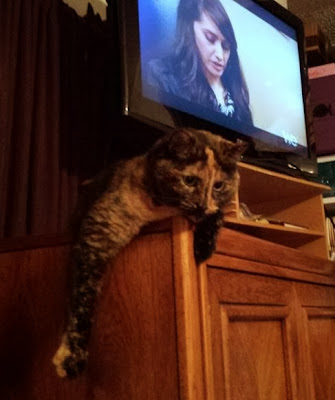 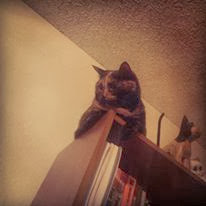 Shelly is doing great, she likes having a new sisfurr.  Polli and Shelly pal around a lot, they play together and sleep together. 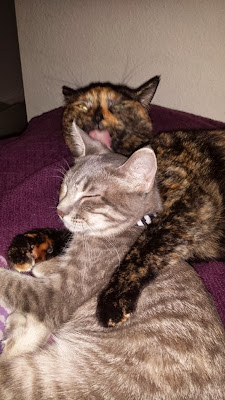 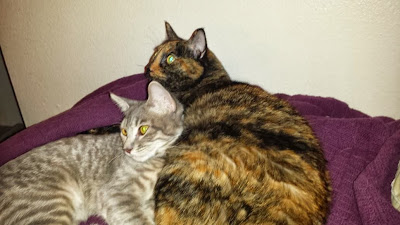 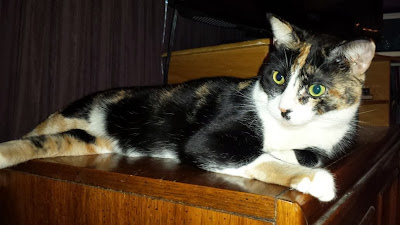 Sierra and Polli have made furriends also.  They play around too, but not as much as Shelly & Polli.  Sierra has kind of become the odd kitty out ... she sleeps most of the time and pretty much spends her time where ever Polli isn't.   The Beans try to give Sierra extra attention, but she has that nasty habit of wanting to play with and bite the fingers.   So the beans make sure Sierra gets extra treats. 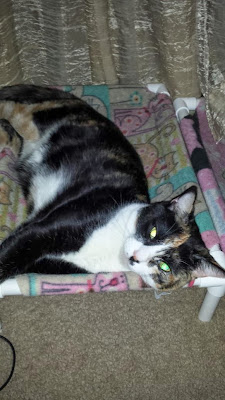 Sierra does a lot of sleeping, but as you can see she is almost to big for her bed.   Sierra likes to dash out the front door and did so late Thursday night when LaurynBug came home from work and ended up spending the night outside. :(  She was so happy Friday morning when she got to come in .... the Beans wonder when she will learn her lesson and also think Sierra got to spend time with the Tortie cat from Shadow's 3rd litter (Polli's litter mate) ..... we will update you on that situation as well.

So now onto Polli!!! 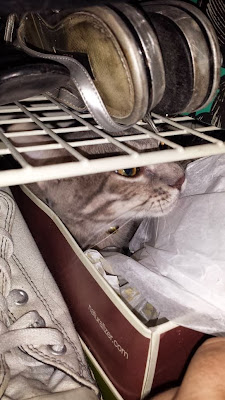 Polli is something else.  She has brought the Beans so much joy.  The Beans know that MamaBug is looking down and absolutely loves Polli.  She has made furriends with Shelly and Sierra.  She spends more time with Shelly learning the ropes ... she follows Shelly around constantly.  She does the same with Sierra, but Sierra doesn't really like it.  She has so many favorite toys that keep her busy throughout my day!!

Shelly showing Polli the ropes of being the welcoming home committe 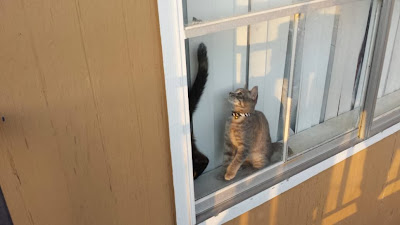 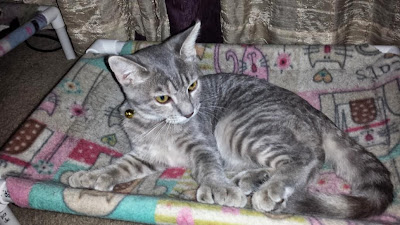 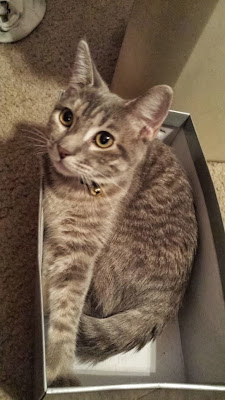 Showing off her adventurous side 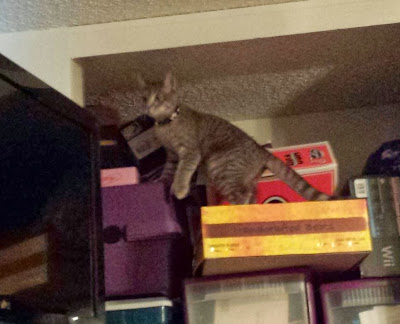 and proving she fits in with the beans ..... Polli watching football 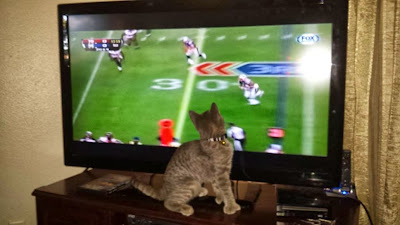 The Beans haven't had Polli to the vet yet, so we don't know how much she weighs.  We hope to get her there soon, especially with me being sick.

So a quick update on me.  TraciBug ended up putting me in the bathroom last night .. neither one of us was getting any sleep and TraciBug was scared I was going to get lost in her room, or not be able to find the litter box.  So the carrier, food, water and litter box were placed inside the tub ... this made a perfect place for me.

It's not a very good picture of me ..... but I got some much needed love from TraciBean, had some water and even used the litter box.  TraciBug mixed me up some replacement milk as I was licking her hand as she was scratching my head. They haven't come up with a name yet .... but we have enjoyed the names that have been suggested ... keep em coming!

Well that is all from us today .... look forward to an update on the outdoor kittens tomorrow.