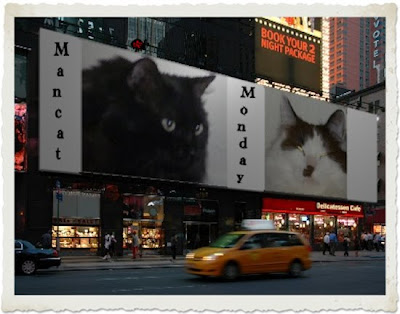 You two deserve to be on billboards!

Me and Charlie think Sammy and Andy make excellent billboard models!! What a lovely sight!!

You two are always stars to us!

Sammy and Andy are you two starring in CATS on Broadway? Great picture!!
Madi and Mom

Ahahahaha...gosh, ya'll sure do looks good up theres fur alls of NY to see. Too bad it wasn't one of those animated billboards.
Puddles

That billboard is wonderful! You are both so HANDSOME!
Ohh and Mummy will be in touch about a new member for the Cow Kitty club! Our new brother Yuji!!!
Purrrrs, Keiko, Kenji, Pricilla AND Yuji!

We always wanted to see the famous on billboards and now our wish has come true.

That's great! Our human would much rather see you guys on a billboard than what they put up "in real life."

P.S. Our human says she's been having an occasional adult beverage to de-stress while listening to Nicki's yeowling. Ha!

You look awesome up there!

I'm surprised you haven't caused a traffic jam with everyone stopping to admire your billboards! Looking good fellas.

That is such a neat picture right up there on the bill board. That is just great.
Have a wonderful week.

Stars! Your pictures belong on billboards for the world to see your beauty.

You guys belong up there! Cool!

Gosh U two are just the handsomest mancats. ~Artemisia

You two deserve to be on a billboard

That is the sort of billboards we like to see.

That billboard of you two super models is sure to draw quite a crowd.

How cool to have your faces on that billboard!!

Woah, you two are famous, fur sure!
--JB