Hi!  So sorry to drop the news about Andy without any explanation.  I was pretty shocked, upset and devestated and it's been pretty hard for me to come back here. We are not really sure what happened .... he had been hiding more than normal but we would see him at least once a day and he appeared ok.  Wednesday morning before we left for school and work he came out and he seemed fine.  When we got home TraciBug hunted him down to find him not breathing.  We rushed him to the Vet only to be told there was nothing they could do.   Vet thinks it was probably cardiomyopathy (heart attack), which happens more than what people are aware and with out any warning.   We could have paid to have a necropsy done, but chose to have him cremated so he can join Sammy and MamaBug --- they are waiting on a shelf to be spread among the Bluebonnets (thankfully we didn't have very many this year, which is why Sammy and MamaBug are still on a shelf).

We thank you so much for all the kind words, prayers, purrayers.

On a happier note ... the kittens are growing by leaps and bounds.  They are running around and one is even climbing.  We've had some rain storms lately and the tarp that covers the balcony is need of replacing (it has big holes in from the cats claws as they walk on it) so hopefully we can get the balcony cleaned up for them ... and get the tarp replaced.

Hoping to be able to take some pictures when we clean the balcony .... but until then this picture will have to do. 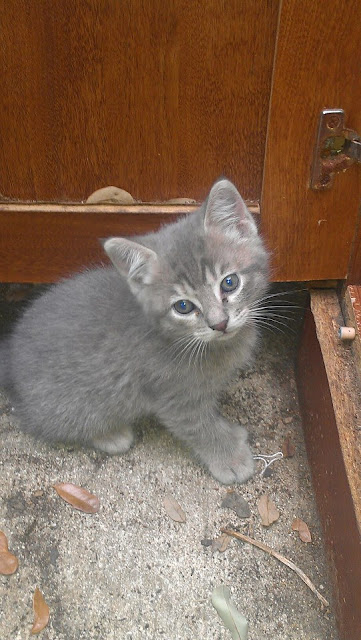 Anyone notice his/her paw, there is an extra toe ... I think it called polydactyl ... it's just to darn cute!!!!

OMC, that kitten is precious!

I totally understand why you didn't leave much information about Andy, and I was sure you would return and explain more when you were ready. It has been a very rough year-plus for you, so please don't be hard on yourself.

You've really had a tough time so we understand. Those kittens are so cute...we hope they are putting a smile on your face. And yes, extra toes is a polydactyl. Ernie has extra toes too. Very cute!

It is so hard not knowing what happened and so sad that it happened so fast. WE are sending hugs and and prayers. That is a very cute Poly kitten. Also known as Hemingway kitties!

So sorry to read about Andy. Sounds like there was nothing you could do. Run free and wild over the rainbow bridge sweet Andy.
Our best wishes as always Molly.

Please don't feel bad about coming back. We know you did the best you could, and you've had a lot thrown at you in the past year. Please continue to update us all guilt free.

Please don't feel bad about coming back. We know you did the best you could, and you've had a lot thrown at you in the past year. Please continue to update us all guilt free.

Blogville understands. We were looking for the update too
Benny & Lily

Yes we do understand and it is hard for you. That kitten is just gorgeous. Mum and dad saw lots of those kitties at Hemimgway's house in Key west. So cute. Hugs GJ x

You have had a very tough year and are doing the best you can. What a beautiful kitten. Hope good things come your way soon.,