Ms Shadow Kitty and Her Kittens and Some Misc Stuff

Let's start with some misc stuff!

TraciBug, once again, has changed jobs!  She was very excited when this job came up and she knows MamaBug would have been so happy for her.  She is back to work in the Medical Field, TraciBug went to Medical Assisting school many years ago before LaurynBug was born.  She hasn't been in the Medical Field since LaurynBug was born, so this is truely an awesome opportunity for her.  She works normal hours now (8-5) and has weekends off.  She is working for a practice of 5 surgeons who specialize in Colon and Rectal surgery as well as general surgery!  She is really loving her job.

LaurynBug has a boyfriend and has for about 6 mos now.  He has been so supportive of her through this difficult time.  She has been struggling some with the loss of her Mimi, but she is getting some grief counseling and is doing much better.

Korinna has turned 14 .... YIKES ... and got to go see Justin Bieber in concert for her birthday!  She had such a great time!  TraciBug thought there were way to many screaming girls LOL

All of us kitties are doing AWESOME!!!  Andy doesn't hide as much and actually sleeps on TraciBug's bed WITH Shelly laying on it to!  He hasn't had any owies lately.  The two of them still have altercations, but nothing like before.

Sierra is still Sierra!  She is all over the place and her and Shelly still play like crazy!

We will get some update pics of us cats soon!!!

Until then enjoy some pictures of Ms Shadow and Kittens 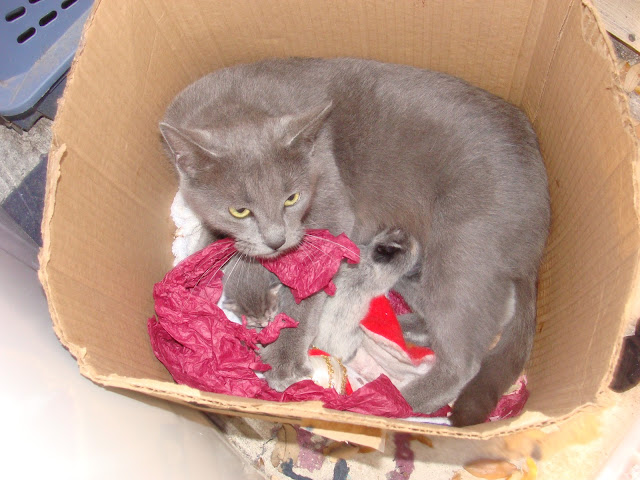 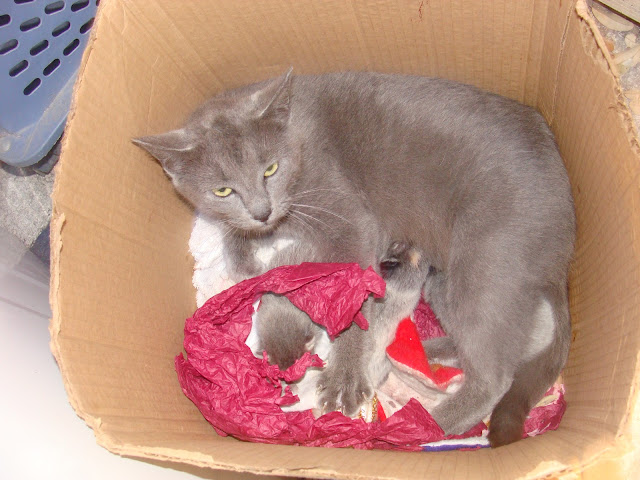 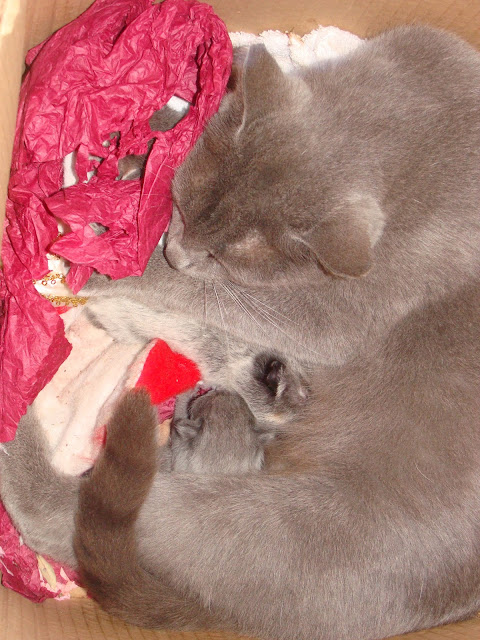 As you can see they are in a pretty small box.  TraciBug stopped at Big Lots and got a clear plastic container and put some old towels in the bottom.  She is hoping Shadow will move her kittens in the container so they will have some more room.

When TraciBug was out on the balcony putting the container out, Shadow was softly meowing at her.  So she leaned forward and put her hand in the box and started scratching Shadow's head ... Shadow really like this!  TraciBug didn't mess with the kittens at all, but did see there are 3 little of them.

We have food and water out for Ms Shadow and are purrrayyyying she doesn't move them tonight!!

OMGosh these kitties are so little!!!!

Thanks for the update on you all - it sounds like there are lots of good things going on with all of you! I'm glad to hear that Andy, Shelly and Sierra are doing so well.

Shadow looks like a good mom... I REALLY hope she keeps her kittens on your balcony!

Sounds like things are going well over at yours. We too hope Shadow will be OK with the kitties. Paws crossed. Have a super Saturday.
Best wishes Molly

It is great to hear all your good news. We expect the best way to keep Shadow there is to disturb her as little as possible - just put the food and water out for her and leave. Good luck!

We're glad to hear from you and are delighted that TraciBug has a great new job. Here's hoping Shadow leaves her kittens on your balcony.
Luv Hannah and Lucy xx xx

Lovely update ad glad things are doing good. Gorgeous little kittens. Hope mum stays with them. as you are putting out food and water hopefully she will feel safe and stay.. Hugs GJ xx

shadow has beautiful kittens! hope she stays put so she can get spayed this time.

my daughter loved being a MA. she did go back to school and is a LPN now. it takes a special person to work in the medical field. i am sure judibug is very proud of you.

prays for laurynbug to continue working through her grief. there must have been a very special and deep bond between the two.

We are so glad to hear from you! We know it has been a hard year for all of you. You are doing a good job with the blog! Good luck with Shadow.

Thanks for the update. We are glad to hear you are all doing well. We are glad TraciBug has a new job and is enjoying it.

Thanks for the update. We think about all of you often. We're glad you're all doing good...'specially the kitties!

we are glad to see the update....and what good news for all of you. we are glad to hear you plan to continue to be a part of the cat community. purrs

How wonderful to hear from you and to hear that everyone is doing well.

We are so glad things are going well with you all--you deserve it after the stressful times you've had.

We're glad to know you're all doing well! Those babies sure are cute!

We were so delighted to see a posting from you all! Glad things are going so well and congrats on the new job!

Congrats to TraciBug on the new job and to Ms Shadow and her new kits!