We have a new fuRiend that hangs out on the balcony.  I, Sierra, try to play with her while Shelly attacks the glass trying to run her off --- I think she still remembers that was her turff.  Andy and Sammy don't seem to be bothered at all by her . 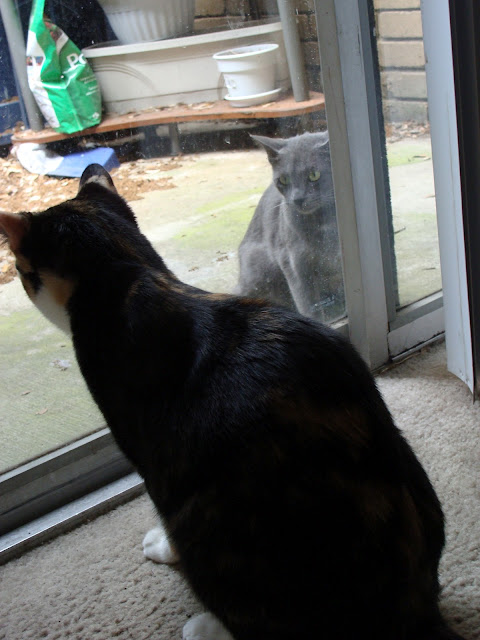 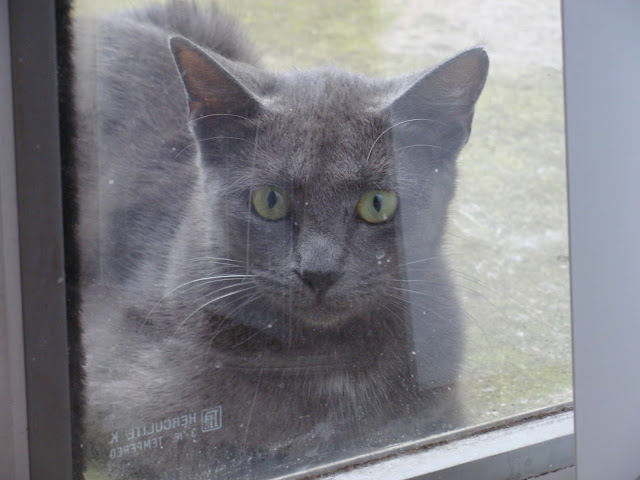 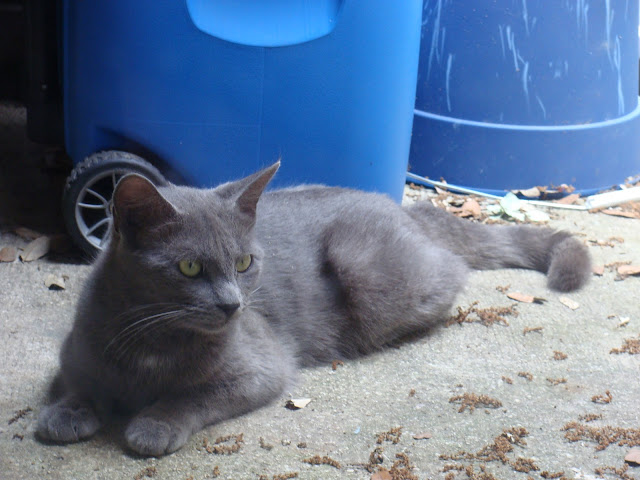 we also decided that she needed some water and food ...... 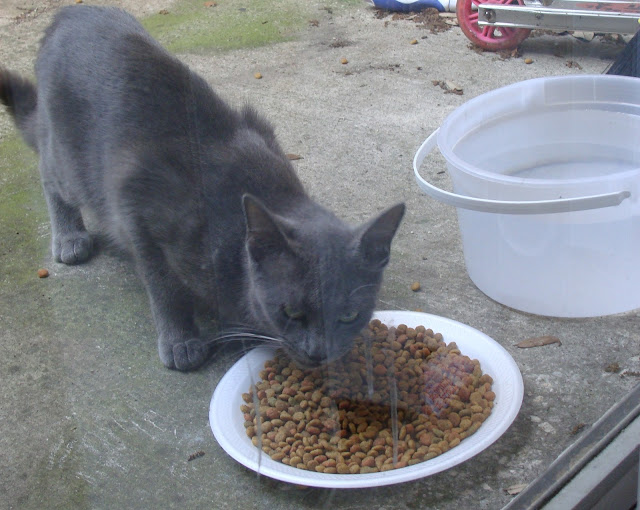 we really can't have another cat in the apartment, we are running out of places to put litter boxes.  So we will try to befriend Shadow and then see about getting her fixed.

Since giving Shadow food she decided to bring some more furRRRiends with her.
KorinnaBug and TraciBug came home from church on Wed night to see this on the balcony. 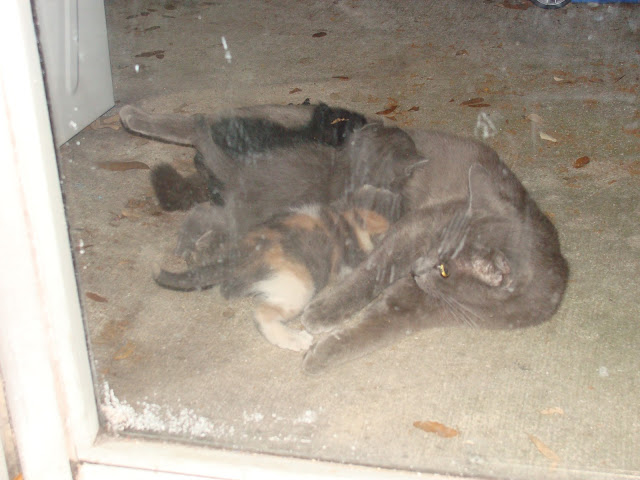 Yup, Shadow already has kittens and felt comfortable enough to bring them to our balcony.  Every time one of the Beans goes out there Shadow hisses and growls.
There are 3 of them .. they are sooooooo cute!! 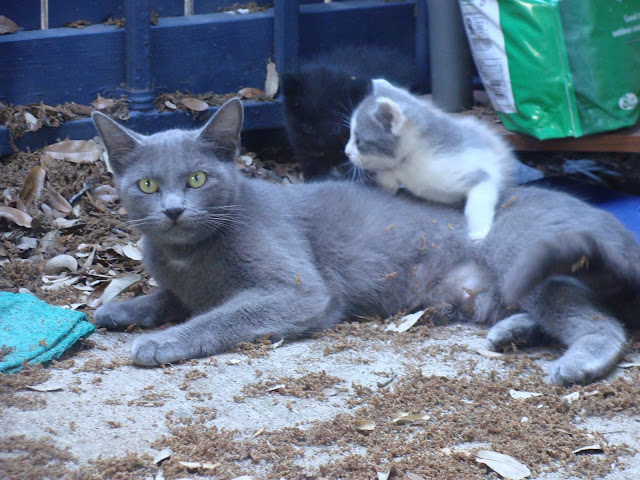 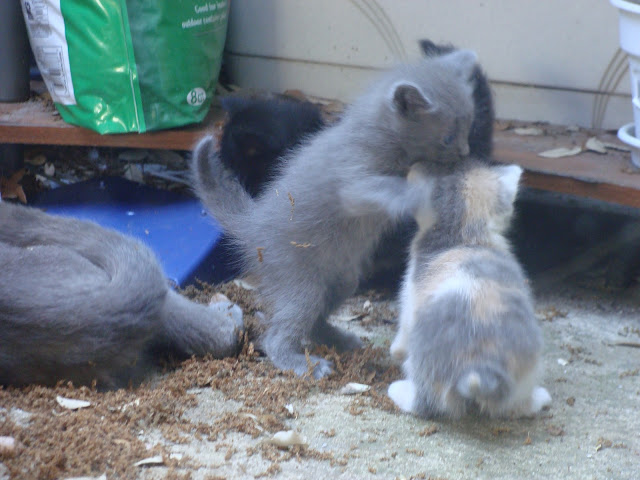 The Beans fixed up a box with a nice comfy towel in it, but they prefer to lay in all the leaves and cedar.  TraciBug is really wanting to go out there and clean up all the oak, but is scared Shadow will move the kittys .... oh yeah and we have laundry to do also (our washer and dryer are on the balcony).

I'm off to go check on my new fuRRRRiends.  Happy Friday to all!!

Awwwwwwwwww, Shadow is beautiful and her kittens are so cute. What a lovely new friend you have :)xx

She is BOOTIFUL, and Rumblemummy keeps going to look at those kittens...she better not be getting ideas!

Shadow is gorgeous - I hope she gets a little more friendly soon and she accepts the help you are willing to give her.

Wow, you've got a whole family camped out on that balcony! I think word has gotten around that you guys are a soft touch!

What a beautiful little family! Squee!

Oh my stars! Awwww Shadow and her sweet adorable babies! Awwww it's brilliant your HumanBeans are there to help this gorgeous mum, sweet Sierra!! It's great that they're safe and looked after, thank you so so so much for caring! Take care
x

Oh, my. She's gorgeous. Thin, but gorgeous. And such sweet babies. We're going to cross our paws you can trap them to get them to a no-kill rescue, perhaps. Certainly to get the mom spayed, and of course her babies fixed too. Let us all know if you do get them and need a few dollars toward the vet costs--we'll chip what we can.

Oh how bautiful and that she trusted you enough to bring her babies. I agree with Fuzzy tails leet us know if you need help with getting them fixed.. Hgs GJ xx

Shadow must trust you to bring the kittens there!!

What a sweet, adorable family. Shadow has the most amazing green eyes. I know your funds are tight. Perhaps you could see if your community offers free TNR for outdoor cats. You could get Shadow spayed and adopt out the kittens.

I agree with others in saying that word has gotten around that your place is a kitty haven. :-)

Shadow is very purties! I bets ya'll was shocked to sees her withs kittehs. But glad her was comfortable enuffs to bring them near ya'll.
I am glad ya'll is ables to help feed them.

I want a kitten!! I LOVE kittens. Seriously, whenever I see kittens I get so excited wagging my tail and doing my yorkie happy dance! They are just beautiful!

Awwwwwe! Shadow and her kittens are sooooo cute!!

Wow a bootiful mom with adorable kittens. M likes that calico one. She hadn't better get any ideas. I don't need a kitten pouncing around on me.

OMC! how cute are they?
Shadow looks like TK's little sister!
All the kitties in the neighborhood know where the loving hearts live. They are very lucky you moved there.
We are thinking and praying for you.
Love, TK, Squashies, Toby and dee

Shadow is a very smart Mama cat to find you all!

This is just like what happened to me when I was a baby! My mama brought my sibs & me to the peeps' veranda! Shadow must be very smart... just like my mama was.

What a lovely family - if you need help to get them spayed we can chip in a little!

Oh, Shadow and her babies are gorgeous and we are so happy they have you guys to care for them...Sending purrs and prayers and hugs to Judi...Happy weekend, sweet, precious friends...xoxo...Calle, Halle, Sukki

They are all sooooooo adorable! Hey, I am a boycat, I don't spray, but I love to play!

Sweet little babies. There is noting more precious than a baby kitten. I hope they can be found homes.

Shadow is beautiful and so are her kittens. WE hope you can get her fixed up so she won't have any more. BOY those are cutie bugs!
:)
purrs
>^,,^<
♥Abby♥Boo♥Ping♥Jinx♥Grace♥

Shadow is beautiful...and her babies are so cute!! Shadow knows the right house to go to!! We hope you can get Shadow fixed so that she won't have any more cute kits!

Shadow is lovely and her babies are adorable.

Shadow appears to be a good Mom! She knew where to get food and water and shelter! WE hope you can tame them and find good homes for them!

How cool that you made a new friend! She is very cute, and her kittens are adorable!