Together Thursday...and about our Mama

Note from Mama:  Sierra is growing by leaps and bounds......she is already longer than Shelly and almost as tall as Shelly...and she is only about 7 months old.  Shelly will soon be the "little sister"!!!!!!!!!! 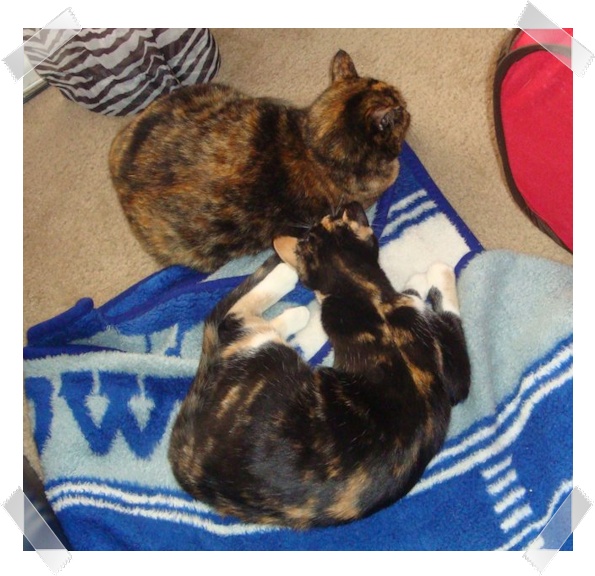 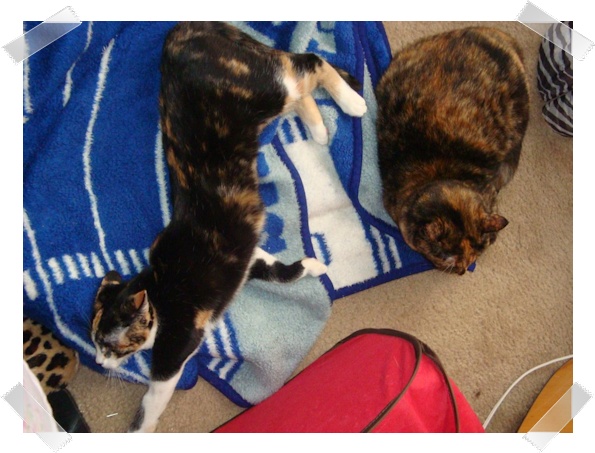 Mama had her appointment yesterday. She is very deficient in Vitamin D and will be taking megadoses of it until she is within normal limits again.

She tested borderline diabetic, so a more advanced test was ran to see where she really stands.....she couldn't remember the name of the test.  :)

The doctor was most concerned about the fact she has lost more than 55 pounds in the last couple of months and that she can hardly eat anything without getting nauseated. That along with the other stomach and bowel problems she's having is getting her sent to a gastroenterologist.

The doctor also confirmed that mama has 3 hernias from all the colon surgeries she had a few years ago....and after they find out what's going on down there, it will be decided what to do.

Please be praying for our sweet mama as she is in lotza stomach pain daily.....and arthritic pain depending on weather.

Your human must be suffering horribly - I am purring lots for her!

Thank you for the update. Oh, your poor Mama. I hope and pray that the doctors can fix her up soon. Herman will be purring for her recovery.

We are so sorry to hear about your mom ~ we are gonna purr and purr that the doctors can fix her up. Sending love and healing purrs. xxxxxxxxxxxxxx

Oh your sweet mama!! Me and Charlie are sending her tons of purrs and healing hugs! We are glad the doctors are doing all these to help her now - but your poor mum must be so exhausted! We pray she gets better!

Sierra - you are just a little darling! Yay! Hugs too to sweet Shelly, Sammy and Andy!

Oh gosh, Judi, we sure are sending tons and tons of purrs. Sounds like you have your fill of problems. We sure hope those doctors can help you. That is a lot of weight loss. But just take it all day by day. We sure are thinking about you and have you in our prayers. Take care and thanks for the update. If there is anything we can do to help, please let us know.

Mega Purrs for your mom !!!!
and paws crossed for her
Many Hugs and Love
xoxo

OMC!!! That is a lot of serious stuff Mom Judi is dealing with! We are keeping her in our thoughts and purrs that the doctors can get things under control for her. (((HUGS)))

As for little siblings, we know what you mean: Junior isn't so...junior anymore. MOL

We are sending our best purrs to your Mom and hope those doctors find out what the problem is.
Take care Judi.
Luv Hannah and Lucy xx xx

We appreciate the update. We're sending mom Judi our loudest purrs and purrayers, hoping all will be well. We hope that since she's only borderline diabetic, a change in diet will work. Paws crossed.

Kitty kisses from us.

I hope the doctors decide what they can do for you soon. Please let us all know what happens.

Mom Judi...you are definitely on my prayer list and you and I both knws He hears us.

We are sending big purrs for your Mama! We love her so much and want her to be better!

Wow! Sierra yous is getting really big!
And we is sending purrs yto your Momma that they can helps her not feel so bad.
Kisses
Nellie

Wow, your poor mom is dealing with a lot right now! We wanted to suggest getting tested for celiac disease or food allergies. We hope she feels better soon.

Sending tons of purrs for your Mom!

Has she been tested for Celiacs Disease....the one where people are allergic to gluten? Might be worth checking.

Here is a link about Celiacs:

Oh purrs to your Mama. We hope she starts feeling better soon. We are ambivalent about saying this as you are not a patient of ours, but we do agree that Junior's suggestion may be worth looking into.

yer momma is not able to eat???? horrors!! what a nightmare! we hopes that the people vets can find out what's causin' the pains an' make 'em GO AWAY pernamently! we will purrr like diesels fur her!!

Oh! We´re sending our best purrayers to your momma!!!!!!
The best and good vibrations for her!!!

DEAR SASS and Mama J you are all in our prayers and thoughts daily.
Vitamin D3 is a big deal now. About 3 or 4 years ago at my appt. I was put on a mega Vit D tiny green gel cap. It shot my up in about 3 months. I hope you can see your gastro Dr. very very soon,
Hugs C

Sending heavy dooty purrrrrrrss & purrrayers to your Mamma. We hope those bean vets figure out what is wrong soonest.

PS, from Dad: Have they considered Crohn's disease (or Colitis)? My brother has that, and it took them YEARS to finally figure out what was going on. Your Mamma's symptoms sound similar. Just a thought.

We are sorry that you're sweet mama is having so many health issues right now. She will be in our daily prayers and hope Dr's will get to the bottom of this and be able to help her soon.

Hugs
and prayers
coming your way.

We are all sending lots and lots of purrs to your Mom! Hey, you two girls are sure pretty!

Our thoughts are with your Momma!

Two beautiful sweeties you are.

Prayers are going up from here for your sweet mama we hope she gets all better very soon. Hugs and nose kisses

Sierra, you are getting so big and pretty.

We are glad your Mom has some answers. Being diabetic can be managed with diet if is is not too bad. Our Dad has that but he has to take hands full of pills for his. Mom and Dad both take Vitamin D every day, too! WE hope they can help Your MO with her pain and get her all fixed up!

We are sending lots of purrs for your mama that the doctors can very soon get her feeling better.

We is purring fur yoor momma, not being able to eat wifout feeling pain is horrible! We sure hope dey can fitz her tummy.

We is gonna purr your Mama through this. Both you girls are so pretty! Gonna be lots of mancats come a-callin.

We are purring very hard for your mama!!

Sierra is going to be a big girl
Benny & Lily

Lots of purrrs and prayers to Mom Judi!! We hope the Dr. gets her all fixed up!!
Your TX furiends,

Oh my gosh, your poor mama! Please give her a big kitty hug for me. I'll be thinking about her.

That is not good news that your dear Mama has been having so much trouble with foods and lost so much weight. Maybe the weight loss is helpful for the diabetes, but it is horrible to have trouble when eating. We hope the gastroenterologist ha some helpful answers to help put you back on track. Will be purring hard for you, Judi.

We are purring for your Mom. Paws crossed the doctors get her feeling better soon.

I've dealt with IBS most of my life so I know how painful this kind of thing can be.