Hi, sweeties.....Thursday is Cinco de Mayo, which is a BIG celebration where we live.....we will be going to Houston to celebrate with Missy, KC, Faith, Sol, BJ and Smokey....we hope y'all will mark your calendars and attend their annual party also!!!!!!! 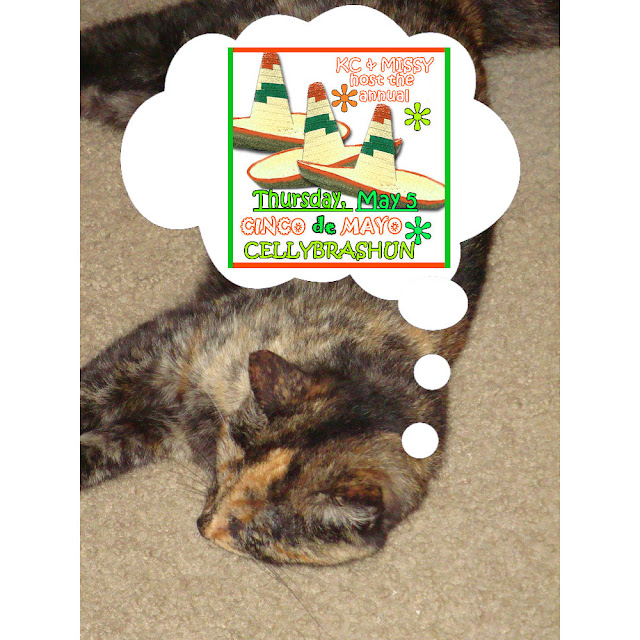 Cinco de Mayo (Spanish for "fifth of May") is a holiday held on May 5 that commemorates the Mexican army's unlikely victory over French forces at the Battle of Puebla on May 5, 1862, under the leadership of General Ignacio Zaragoza Seguín. It is celebrated primarily in the state of Puebla and in the United States. While Cinco de Mayo sees limited significance in Mexico itself, the date is observed nationwide mostly in the United States as a celebration of Mexican heritage and pride.

Cinco de Mayo is not a Mexican holiday—it is an American Civil War holiday, created spontaneously by Mexicans and Latinos living in California who supported the fragile cause of defending freedom and democracy during the first years of that bloody war between the states." Cinco de Mayo is not Mexico's Independence Day.

I am looking forward to Cinco de Mayo - I am hoping my human will bring home some Mezcal so I have a worm to eat!

Thanks for the history lesson. You are one smart, kitty. Have yourself some fun on Thursday!

Ah, the joys of having a home! We think it sounds like an awesome party and we will definitely attend!

Shelly, we'll be at the party, we're sure it's going to be a blast! We remember last year's...took us a long time to recover! You'll have a fab time!

We never knew there was such a rich history behind a great party. Ole!

Shelley... thanks so much for that wonderful explanation of the holiday. I didn't know all that. Have a great celebration.

Thank you for the info about Cinqo the Mayo!!! What a great day to celebrate!!!

That is really interesting, thank you! Anyone who beats the French have our vote definitely ;-), Enjoy your day and be proud, we're sure you are. Dex & Louis x

Oh Shelly, how exciting...your furst party!!!!!! Well dats just enuffs to celebrate and da fact you has a wonderful home!

Thank you for telling us Cinqo de Mayo - we had no idea what it was - you are a very clever young ladycat Shelly.
Luv Hannah and Lucy xx xx

Wow! Thanks for letting me know Shelly! Living in Canada, at our house, its an excuse to eat Mixican Food. Mommy even makes it for us pets!
Kisses
Nellie

Shelly, how exciting that you're going to celebrate your first party! We hope your brothers can enjoy it with you too.

Boy Shelly! You learned a lot living out on the streets!!

Thank you for the information on Cinco de Mayo. Now we feel ready to party.

There are always many celebrations that day. I try and celebrate with Latte as it is our anniversary and we hang out with a lot cats as well.

Shelly we hope your first Cinco de Mayo is filled with lots of fun, food and friends.
Hugs Madi

Oh Shelly, you are so beautiful and so smart too. I love how you can tell us things about an important holiday. I am telling mommy to stop telling you how much she loves you but I know she's going to do it anyway. Of course, she loves Sammy and Andy too. ALL of you look so good and so festive in your sombreros!

We're all looking forward to the pawty here!!!

We hope all of you enjoy your party!! It sounds like fun! Lots of love, Holly and mom

Awww we can't waits until your first party, Shelly!
Love, TK and Squashies

We love your header with your Cinco de Mayo hats! It's a big celebration here too as the Chicago area has a large Mexican population and lots of great Mexican restaurants.

Shelly
We think you are going to have a fun time at the Cinco de Mayo party!

NAK and The Residents of The Khottage said...

Hugz&Khysses,
Khyra
PeeEssWoo: And thanks fur the info too!

Shelly, we are glad you will be able to relax and enjoy the party this year! Thanks for all of the information about Cinco de Mayo - we didn't know all of that.

Your explaination is wonderful!

THank you for explaining that. Our Mom knew but has friends that do not!

KC and the Giggleman Kitties said...

Can Shelly come over and be mine Specshul Guest of Honor at mine partay tomorrow????
Love & Purrs,
KC