We are celebrating Cinco de Mayo today........in San Antonio, it's a huge celebration.....so we're purring that you will celebrate with us today. 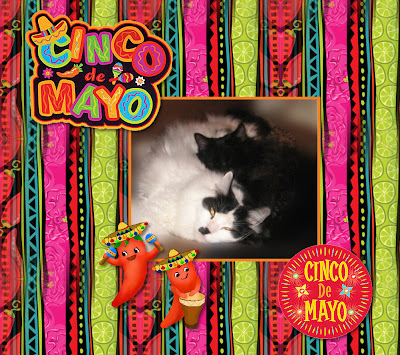 The History of Cinco de Mayo:
Cinco de Mayo officially commemorates the anniversary of an early victory by Mexican forces over French forces in the Battle of Pubela on May 5, 1862. It is not the anniversary of the defeat and expulsion of the French forces by the Mexicans, which occurred in 1867. It is also not, as is often assumed, the day of Mexico's celebrations of independence, which are actually held on September 16. It is believed that the origins of Cinco de Mayo celebrations lie in the responses of Mexicans living in California in the 1860s to French rule in Mexico at that time.

Happy Cinco de Mayo!...We love the festive photo and are so happy to be celebrating with you handsome boys!...Kisses...xo...Calle, Halle, Sukki

Happy Cinco de Mayo! Thanks for telling us the true meaning of the day.

Thanks for the information and explanation, since we had no idea what this celebration was about, and are seeing it all over the CB today!

We would love to come visit you guys to celebrate! Happy Cinco de Mayo!

Sammy and Andy...you two are in the best city to celebrate today in style. Mom says she might have to get a taco for lunch,
:-)!!
Madi and Mom

Happy Cinco de Mayo! We are celebrating here too. Have a wonderful fiesta friends!

Beautiful picture frame. Happy Cinco de Mayo to you too.

Happy Cinco de Mayo, Sammy and Andy and mama! Sounds like lots of fun. Are you eating Mexican food today?

We don't celebrate it up here in Canada, but we certainly can appreciate it.

HAPPY CINCO DE MAYO! We have been at the Sherwood's party. You should come over there too!

Since we are Transplanted Texans, we celebrate this holiday...of course!!

Happy Cinco de Mayo - we had never heard of this until today!! Hope you are joining in a fiesta.

WOO~HOO..Ariba, Ariba! Skeeter is sending some spicy smoochies to Andy today for Cinco De Mayo! We hope you all have fun and we love ya LOTS!

Happy Cinco de Mayo! I love that picture frame and the little peppers playin' their music. I appreciate the explanation of the day since I didn't know the true origins. You live in San Antonio? My beans love it there! Hope you have fun today!

Happy Cinco de Mayo! The photo of you boys is great...love the bright colors. We just finished a nice big burrito at one of our favorite places...delicious!

Happy Cinco de Mayo to you too! Another good reason for a pawty!

Happy Cinco de Mayo. Does this mean a lot of wonderful Mexican food ?? Lets see, I will have a cheese enchilada, a chili relleno. a empanada, a taco, I could go on and on. I dearly love Mexican food.
Happy celebrating.

Happy Cinco de Mayo. Today is a day of celebration in The Netherlands too. It is Liberation Day. Celebrating the end of the occupation in WWII. (Although our city Eindhoven was already liberated on September 18th).

Perfect frame for the lovely boys--

Feliz Cinco de Mayo, mis amigos!! Would you like to join us in a meowgarita to celebrate??

Hmmmm...lots of interesting history lessons today in the CB. I totally thought it was the independence day thing! Thanks!
...and thanks Andy for being a good sport in your spar with Snafu!
~Lisa Co9T

We have been at the Sherwood's...but we're here now for a little rumble! Let's play!
xx lounge kats

Sniffie and the Florida Furkids